The 360 Film Festival unveils its Jury and the selection of its fourth edition... 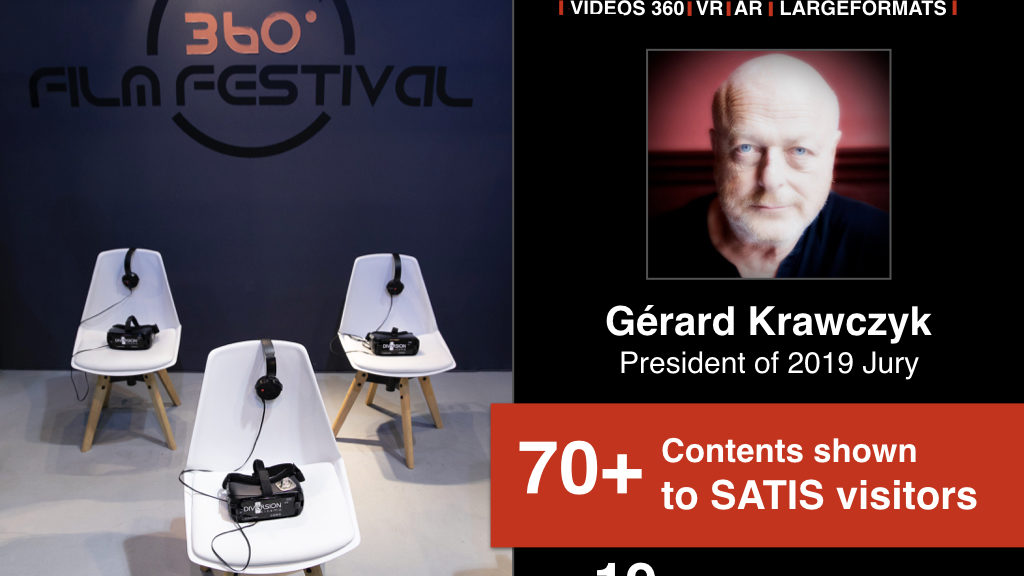 A key director of French cinema, Gérard Krawcyzk has multiplied his successes, particularly with the TAXI quadrilogy, which has enabled him to be the leading French director at the French box office with nearly 25 million admissions between 2000 and 2010. Since then, Gérard Krawczyk has gone to the United States where he directed the last two episodes of the TAXI BROOKLYN series. In France, he returned to Marseille and made a documentary of the same name, a portrait of the city of Marseilles. He also published the novel Foudroyé(s) with Éditions du Cherche Midi. Gérard Krawczyk has just finished shooting his latest feature film in China. He is doing us the honour of chairing the 2019 edition of the 360 Film Festival…

Producers and creators have once again answered the call of the 360 Film Festival. More than 140 contents, including some 50 exclusive contents from 27 countries, were received.

Two selections will be presented on November 5th & 6th at the SATIS-Screen4All.

In competition, 32 creations have been selected and will compete for one of the festival’s prizes:

Among these 32 creations, the selection committee is pleased to welcome 19 world premieres at the festival:

– The Drive by Adia Ivey and Jewel Ifeguni, USA

– Are we dead from Virtual Room, France

– Mission to the Stars by Rosemary Alexander-Jones, United Kingdom

To illustrate the diversity of immersive format creation, the 360 Film Festival will present some forty high quality out-of-competition content over the two days.

Detailed information about the Jury….

A president is always accompanied by his team, to accompany Gérard Krawczyk there will be…

Urszula GLEISNER: expert in cross-platform content and virtual reality, she evangelizes these concepts in Europe. His 17 years of experience in international organizations and new media (Technicolor, UNESCO, Europe Créative, Hewlett-Packard, Vision Factory, Gleisner Consulting) allows him to effectively support producers in the management and development of their immersive projects.

Lidwine HO: fiction and documentary sound editor until 2008, she then joined the innovation and development team at France télévisions to produce binaural sound content. She then specializes in 3D sound, sound for new media such as podcasts, interactive fiction or documentaries, virtual reality productions. She has accompanied numerous projects on the contribution of sound to new narratives.

Oriane HURARD: producer within the company LES PRODUITS FRAIS, located in Paris, she is more specifically in charge of interactive and immersive works. His latest production, Benjamin Nuel’s Island of the Dead, won the Lion for best VR narrative at the last Venice Mostra. Oriane has worked for many structures related to new writing, alternating between production (La Générale de Production, ARTE, Ex Nihilo) and programming in festivals (I LOVE TRANSMEDIA, Festival Tous Ecrans, Séries Mania).

Mauna TRAIKIA: territorial adviser in charge of digital development, culture and creation of the territory of Plaine Commune Grand Paris, she is a great passionate about Digital, foresight and specialist in digital transformation…

Stéphane JUFFÉ: striving to offer top-of-the-range quality content, this award-winning digital entrepreneur, producer, creative director and director is guided by a constant desire for creativity and technology. He has produced an award-winning 3D series for Marvel (Iron Man Armored Adventures) and produced/directed award-winning content for major accounts (Dior, Paco Rabanne, Deezer, Canal+ Group, Publicis Media, Havas, Fullsix, MCM…). At the end of 2016, with Steve Moradel, he co-founded Bemersive, a Paris-based creative technology company dedicated to XR. He produces immersive content and develops cloud-based technologies to create, distribute, improve and monetize AR and VR. To promote the growth of the French XR industry, he co-founded Uni-XR in 2016, the French ThinkTank of XR.

Massimiliano MINISSALE: after his studies in Italy, he moved to Paris in 2007 where he participated in several interactive projects as a UX and developer. Passionate about digital cultures, he founded Blumenlab, a Creative Technology studio specialized in the development of Virtual and Augmented Reality applications. In his work, he experiments with the latest technologies and new media formats on a daily basis.

Mathieu MULLER: born between Atari2600 and Commodore64, he studied in France, Switzerland and Canada. He then worked for 13 years as an engineer on the graphics engine of a professional flight simulator and game middleware. Now, Mathieu Muller is Film & TV Product Manager at Unity Technologies after having worked as an engineer for film and video game studios around the world for the past four years.

Yves NOUGARÈDE: As a child, he discovered animation through television and then experimented with clay animation on 8mm cameras. He began his film studies at the high school and continued them at the University of Lumière Lyon 2, and in 1997, he became a video operator for the selection committees of the Annecy Film Festival’s film department, where he can see more than 3000 films each year. Since 2012, he has been a member of the selection committee of the Annecy International Animation Film Festival where he became, in 2016, in charge of the Virtual Reality demos, VR@Annecy.

Alexandre REGEFFE: he began his audiovisual career in 1994 in Paris as a versatile post-production technician. 20 years later, as Chief Operating Officer of the Sylicone group, he wanted to take up new challenges: it was the birth of Neotopy in 2015, a virtual reality content production company, of which he was co-founder. Then 3 years later, Alexandre embarked on a new adventure: the creation of RSHIFT. Based in Paris, RSHIFT is a company dedicated to providing services in VR Cinema for producers, service providers and all players in virtual reality. Alexandre works as a VR supervisor, consultant and is also a regular trainer at the INA, but also a VR specialist editor for French and international newspapers and websites.

Bertrand WOLFF: after a few years working for major communication groups, he became a producer in the audiovisual group Kabo Family. In 2015 there was co-founded the Virtual Reality production label VRLINES. In 2017, he created, with Emilie Gobin Mignot, Antilogy, whose mission is to contribute to the development of RV and AR; in March 2018, they inaugurated Le Pavillon… Both showroom, lab, this unique place, at the edge of the event and the training centre, allows to experiment, to be inspired, to develop, to meet, and to be trained around Virtual Reality and Augmented Reality.

To discover the selection of the 2019 edition, register for free at SATIS-Screen4All: